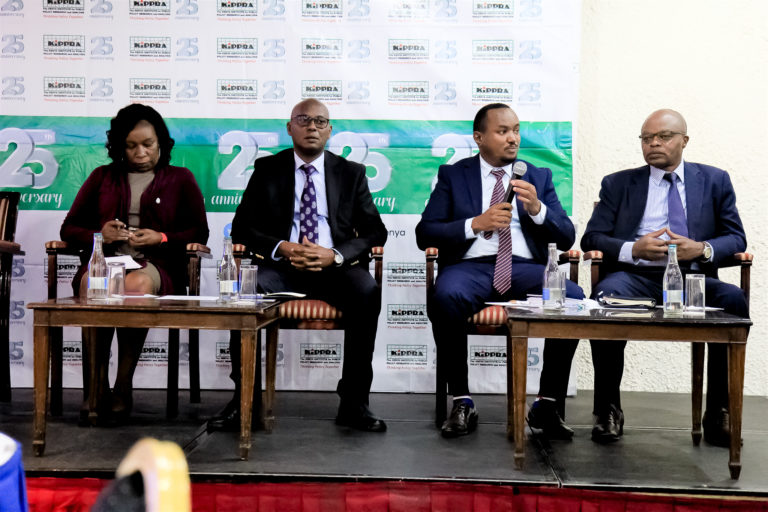 KIPPRA held a roundtable on 28th September 2022 to get stakeholders’ inputs on Trade agreement and Trade Competitiveness in Kenya study. The study examines Kenya’s trade competitiveness under existing agreements and the effect of trade agreements on the welfare of Kenyan consumers.

Speaking at the roundtable Dr John Karanja, a Senior Policy Analyst, who represented KIPPRA Executive Director Dr Rose Ngugi gave a brief overview of the study and thanked the stakeholders for making time to attend the roundtable.

Mr Paul Odhiambo, a Policy Analyst at the Institute, moderated the session.

A presentation on nature of trade agreements in Kenya was made by Mr Kenneth Malot, a Policy Analyst at KIPPRA. This was followed by a plenary discussion by the stakeholders. The issues discussed included drivers of decline in export performance, the welfare of consumers, export competitiveness and special interest groups captured in the trade agreements. Some of the emerging issues during the lively discussions included non-binding bilateral trade agreements, capacity building for SMEs, VAT refunds and excise levy on Kenyan exports.

The panel session addressed some of the issues that were raised by the stakeholders. Some of the issues that came out from the panel discussions included challenges in meeting and satisfying export standards as some of them were very stringent. It was also noted that Kenyan exporters were unable to meet demand in terms of required volumes and produce in large quantities.

The stakeholders gave recommendations on the need to review the trade agreements signed by Kenya as exports done outside the East African Community are mostly done by large firms. It was recommended that Persons Living with Disabilities (PWDs) should be given space in the manufacturing industry. Moreover, stakeholders noted that there is need to focus capacity building programmes by KEPROBA and KAM on the value chain to ensure firms are supported. The stakeholders inputs will go along way in enriching the outcomes of the study.