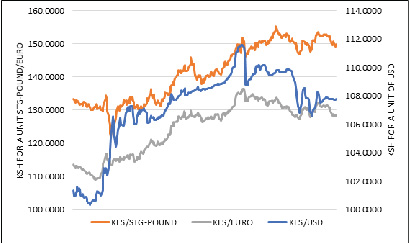 Exchange Rate Dynamics and its Implications on Debt and Trade Flows

Exchange rate is a key indicator of the economic performance of a country. It plays a vital role in determining a country’s level of trade and capital flow dynamics. Exchange rate dynamism majorly influences the current account balance, the repayment of public debt and other macroeconomic prices such as inflation and interest rates. It can also impact the real return of investors’ portfolio and thus affect macroeconomic stability. A competitive and stable exchange rate facilitates economic diversification, which is key in achieving strong economic growth by scaling up production activities.

Kenya has undergone several exchange rate regimes. From the 1960 to 1970s, fixed exchange rate was maintained, which was later pegged to the US dollar until 1974. This resulted to an erratic movement of nominal exchange rate relative to the dollar and depreciated the shilling by 14 per cent in a span of seven years from 1974 to 1981. The regime later changed to crawling peg at the end of 1982 until 1990 when a dual exchange rate system was embraced that lasted until October 1993[1].

After several regimes, the country adopted a floating exchange rate regime where the currency adjusts its value in relation to other currencies. This is primarily determined by economic factors such as trade, production and investment that influence the market forces of demand and supply. Therefore, no specific target is set for the exchange rate unless in extreme cases such as excessive volatility, when the Central Bank of Kenya (CBK) would manage the exchange rate by transacting in either side of the exchange rate market.

Figure 1: Trends in Kenya shilling against US Dollar, Euro and Sterling Pound

The depreciation of the shilling can be attributed to the effects of COVID-19 pandemic, which brought about economic disruptions of unquantifiable proportion. Globally, economies responded by imposing a number of measures, including lockdowns and travel restrictions to control the spread. This disrupted supply chains worldwide, thus placing investors into panic mode and slowing down economic activities. As a result, the economies shrank, and the accumulated uncertainties increased the demand for dollars globally, and consequently cumulating pressure on the Kenyan shilling. Simultaneously, the country exhibited a fall in foreign reserves due to a decline in capital inflows from service sectors such as tourism and air transport, which further exacerbated the situation.

Depreciating currency is expected to lower export prices, thus increasing the volume of exports while increasing the price of imports. This is expected to improve the current account deficit and thus the balance of payment position. However, for a country that majorly depends on imports in form of raw materials, this can have detrimental impact on cost of production.

In 2020, most exports and imports into Kenya remained steady. Some top exports such as tea and fruits even surpassed the 2019 levels. This was despite the lockdown episodes in Europe and Asia, the country’s largest export markets for tea and fruits. As at October 2020, the value for accumulated tea and fruits exports for the year was Ksh 109,334.6 million and Ksh 17,109.72 million as compared to value of Ksh 93,231.57 million and Ksh13,189.04 million for the corresponding period in 2019, respectively.

In March 2020, the Central Bank of Kenya (CBK) rolled out a plan to purchase US$ 100 million on monthly basis up to June 2020 to help boost its foreign exchange reserves above the normal levels. The minimum amount for the purchases was set at US$ 1 million transacted at the prevailing market rate and at CBK’s discretion, targeting the commercial banks. This boosted the foreign exchange reserves to reach US$ 9,229 million (5.55 months of import cover) in the last week of June 2020 from US$ 8,409 million (5.11 months of import cover) in the beginning of March 2020. The overall gain from sale of foreign exchange increased from Ksh 5,122 million in 2019 to Ksh 24,475 million in 2020[3].

To further stabilize the shilling, the government has received support for foreign reserves from the International Monetary Fund (IMF). In April 2021, the IMF approved a three-year financing package of about US$ 2.34 billion Extended Credit and Fund Facility to Kenya to support economic recovery. This led to immediate disbursement of about US$ 307.5 million for budget support and another in May to fund emergency support, bringing to a total of US$ 722 million advanced in the last three months[4]. These significant concessional flows will boost the foreign reserves with the hard currency proceeds sale to the CBK in exchange for the shilling by the National Treasury.

In the first week of July 2021, the official foreign reserves registered the first highest mark of US$ 9,494 million since August 2020, equivalent to 5.81 months of import cover. Given that pressure in the balance of payments predominately results from terms of trade shocks, volatile aid, foreign direct investment and remittance flows, this level of reserve cover is adequate buffer against short-term shocks as it surpasses the statutory requirement of 4 months of import cover and the East African Community convergence criteria of 4.5 months of import cover[5]. In the longer term, for foreign exchange reserves to manage shocks, they should at least account for six months’ worth of imports[6]. There is therefore need to leverage on proper macroeconomic policies to protect countries against potential exchange rate vulnerabilities in future, since reverse holdings have their limits.

Kenya also benefited from the temporary suspension of debt effected on 1st May 2020. The debt suspension service initiative was established by the World Bank, IMF and the G20 in a bid to help developing countries concentrate their resources on fighting the pandemic and safeguarding livelihoods of the most vulnerable people[7]. With an external debt approximately 67 per cent of GDP and majority of the debt in US dollar, repayment of the principal amount and interest rate had put more pressure on the shilling, thus enhancing its instability. However, the current debt suspension initiative will help the shilling to regain its strength gradually. This measure is, however, temporary and only postponed a problem. Long-term and effective measures need to be considered.

Further, the government may consider floating foreign currency denominated bonds locally to mitigate against currency vulnerabilities. Bonds are typically used to broaden the range of debt instruments they employ. However, the cost of serving international capital market (Eurobond) is quite expensive and it usually puts pressure on the local currency; often it causes a downward spiral on currency if the debt service weighs on the currency. Kenya made its first debut in 2014 when it issued the Eurobond. The government was able to raise approximately US$ 2 billion and additionally of US$ 2.1 billion in 2018. If foreign dominated bonds are floated locally, then a number benefits may ensue. The bond will lead to additional foreign currency inflows, which will automatically support the Kenyan shilling; additionally it will solidify Kenya position as international financial market and ensure the country has adequate cover to cushion against short-term shocks in the foreign exchange market. Issuing offshore local currency bond to raise funds in international capital market without exposing the shilling to foreign exchange volatility can also be an alternative.[8]

Ultimately, globalization and increased integration with its interaction to exchange rate vulnerabilities is an indispensable conversation in today’s world. The African Continental Free Trade Area (AfCFTA) Agreement provides a unique platform and opportunity to boost intra-African trade by over 50 per cent, covering a market of 1.2 billion people and an estimated GDP of US$ 3 trillion.  Smooth realization of this trade agreement may, however, be derailed by challenges such as political instability, infrastructure gaps, security threats and the preeminent issue of exchange rate vulnerabilities resulting from the mix of exchange rate regimes especially from one sub-regional market to another.